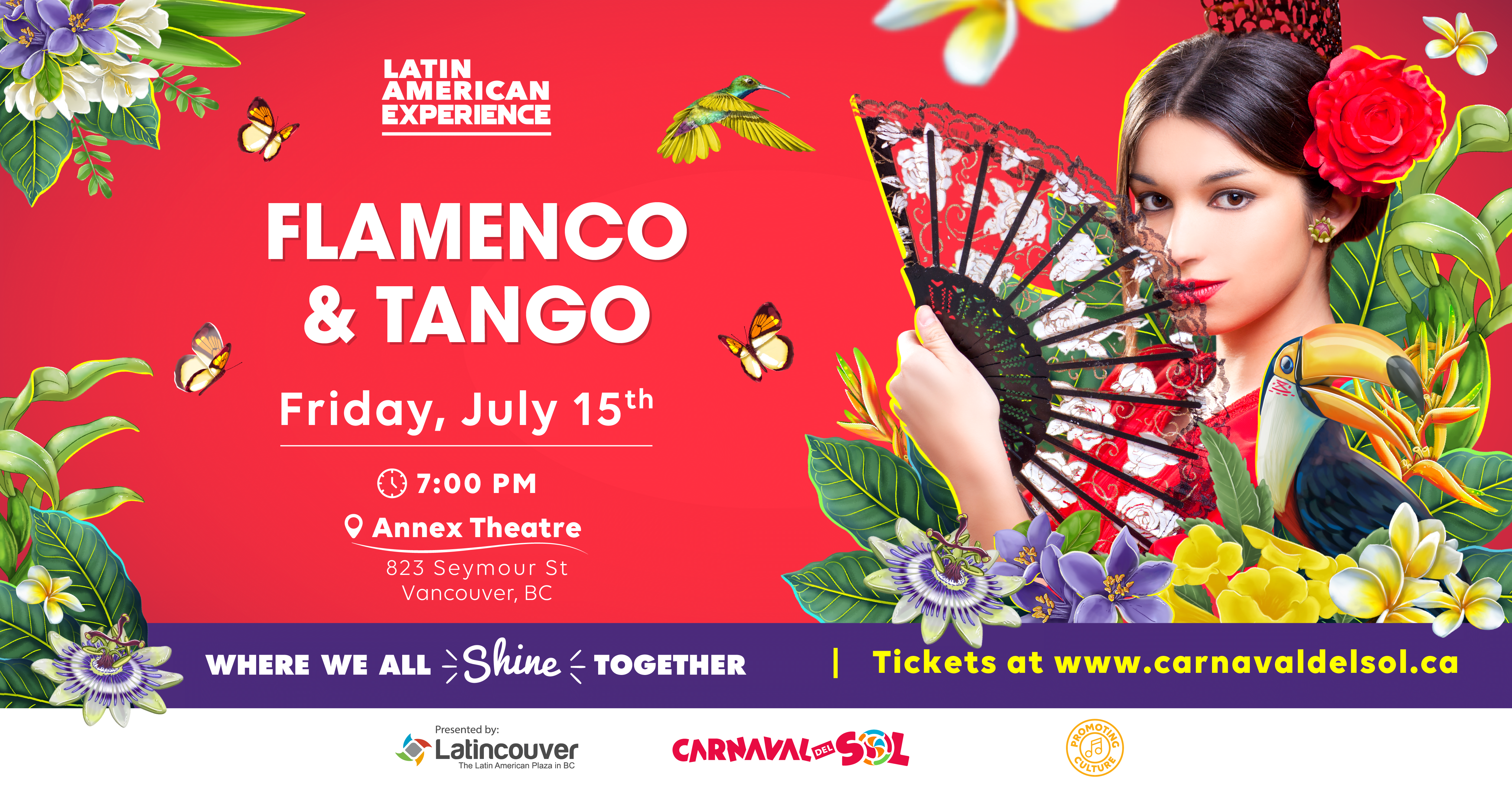 Come and join us for a night of Flamenco and Tango songs, music, dance, and lessons in an intimate setting at the Annex.

Flamenco Rosario was founded in 1989 by Artistic Director Rosario Ancer and Musical Director Victor Kolstee. With its Flamenco Festival, mainstage performances, Cuadro Flamenco series and Professional Training Program, Flamenco Rosario takes pride in creating a platform for Flamenco and young flamenco dancers to flourish in the city of Vancouver. With a loyal, solid and enthusiastic audience, the company usually plays to sold out houses. The company is graced by local talent and guest artists of the highest caliber from around the globe. The company entered a new international phase touring its award-winning production Mis Hermanas in Mexico in 2010, for which Artistic Director Rosario Ancer was awarded the Isadora Award for Excellence in Choreography; she was also honored with The Mayor’s Arts Award 2012” in Dance, as one who captures Vancouver’s rich history and culture, and for making a significant contribution to the creative life in the city and enriching the lives of Vancouver citizens.

As part of Made In BC touring initiatives for contemporary dance, Mis Hermanas completed a spring tour in of 2013 in British Columbia, and the Yukon, to critical acclaim. The company it’s been also selected to tour through British Colombia one of its recent works “La Monarca: The Monarch and The Butterfly Effect” in the spring of 2018.

Flamenco Rosario is known for its spirited, fiery, creative and original performances and collaborations. The company continues to honor both the rich flamenco tradition and to produce presentations, which stretch the boundaries and evolution of the art form.

Mozaico Flamenco has been a moving force in the world of Spanish dance for over 30 years, continuously pushing the outer edges of the artistic envelope, fusing dance, music, and culture. In 1972, Oscar Nieto created Mozaico de Danzas in Los Angeles, California. This ensemble performed a “mosaic” of Spanish Dances including classical, neo-classical, regional and flamenco. The group created a splash with its innovative choreographies, colourful costumes, and blend of new sounds. In 1983, Oscar created Mozaico Flamenco in Vancouver, British Columbia. Far ahead of its time, he incorporated flamenco with heretical instruments such as electric guitar, base, congas, and the cora, which are now currently used in flamenco music. Today Mozaico Flamenco Dance Theatre’s produces engaging, artistic shows for Canadian audiences that promote flamenco as an art form. It has a reputation among local fans for producing performances of rare versatility, polish, and exuberance. The company has performed with the Vancouver Symphony Orchestra and Vancouver Opera, and has appeared at countless venues including the Vancouver East Cultural Theatre, Norman Rothstein Theatre, Orpheum Theatre, Vancouver Playhouse, Arts Club Revue Theatre, Vanier Hall, Cowichan Theatre, Newcombe Theatre, Tidemark Centre, Canada Pavilion, Canada Place, Expo 86, and the Pacific National Exhibition. Resulting not only in acclaim for Mozaico Flamenco, but also a new following for the art of flamenco in Canada.

Gabriel has been teaching, choreographing and performing Argentine Tango for more than 25 years, and started dancing professionally more than 30 years ago with the renowned dance ensemble, Doina.  With an “impeccable musicality” as Linda Lee Thomas once said, Gabriel loves to convey the concept of movement with passion that comes from his own love for tango and dance in general.

While being an accomplished performer and choreographer, Gabriel’s true passion lies in teaching the art of Argentine Tango. His classes focus on conveying and perfecting the fundamentals of tango, and tailoring the dance for every student to bring out their individuality, whether in private class or a group setting.

Gabriel combines a methodical approach with rigorous training in the form of dance drills and exercises that develop and improve technique but also make dancing easy and elegant; the way it is danced in milongas in Buenos Aires. Each element, either simple or complex, is broken down with an analytical and thorough approach that enables students to express themselves and free their own artistic possibilities.