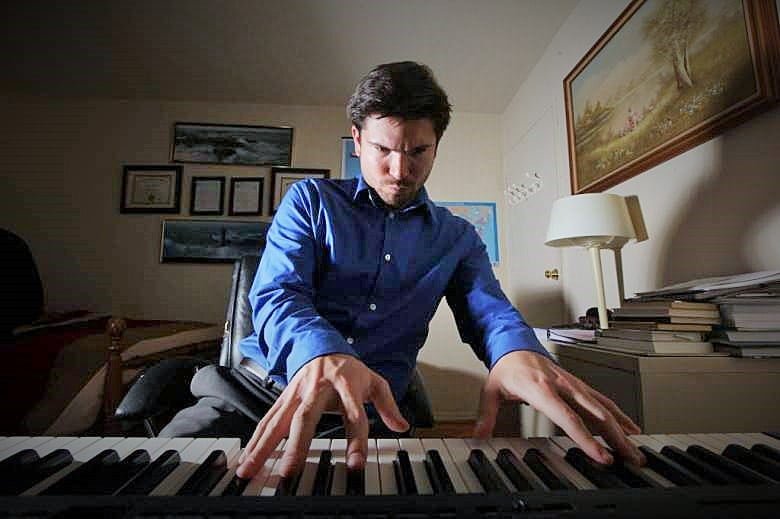 Patricio Molina was famous before he knew it. When he was 3, he showed up to a TV studio with a pacifier and captivated a national audience, playing the piano with a fluency and poise that belied the sight of a tiny boy whose shiny black shoes didn’t reach the ground.

By 5, he had appeared on stage with Luciano Pavarotti. “Little Mozart,” one Chilean newspaper called him before he went on to perform for the king of Jordan and the president of Chile, and in venues in England, Syria, Germany and Italy.

He moved to Paterson with his mother when he was 13 to test himself among better students and better teachers. Short on money and speaking little English, his family relied on supermarket gift cards donated by a church, and the young pianist played at the Brownstone banquet hall to help pay the bills.

At 26, Molina has evolved from a child prodigy to a performer and composer of complex concert pieces. He is simultaneously pursuing two doctorates from Rutgers’ Mason Gross School of the Arts. He would be the school’s first music student to accomplish that feat.

Molina’s focus when he sits at the piano, whether it’s at Carnegie Hall or in his Woodland Park home, is complete. His fingers sweep the piano keys in fluid movements, the sounds emitted are purposeful and clear, and his head jerks up with emotion as he performs his own compositions — including a two-hour opera — which often are infused with Chilean rhythms.

“A rare talent,” said Robert Aldridge, a Grammy Award-winning professor at Rutgers who is advising Molina’s Ph.D. in music composition. “I could tell right away he was going places” he told The Record (http://bit.ly/1Qfk3B3).

The virtuoso’s early career is exhaustively documented in a tidy scrapbook kept by his mother, Kloudya Khouzam, whose sacrifices — moving first to the Chilean capital when he was 7, then to New Jersey — opened doors for her young son.

Molina is teaching five community college classes and directing a church choir in Mahwah, in addition to working toward the two doctorates, practicing, composing and performing. “The things I’m busy with are things I love to do,” he said.

Molina speaks with a rich Chilean accent and joyful confidence, and is sometimes moved to tears when performing. “If you don’t feel what the music is trying to portray yourself, you’re not going to portray it to other people,” he said.

Since arriving in the United States, Molina has appeared on TV and radio, earned two degrees from the Manhattan School of Music on full scholarships and composed a three-act opera with scores for 70 to 100 orchestral instruments.

When Chilean President Michelle Bachelet visited New York City last September and met with the United Nations secretary-general, she also made time for Molina to discuss Chilean culture in the region. Two years earlier, she listened to his opera at the New York Athletic Club.

It’s a long way from the days in the Andes when his sister, one year his junior, would crouch on the floor and push the pedals his legs couldn’t reach.

“Patito,” or little Patricio, began playing the piano when he was 2. “We give him toys, he goes to the piano,” his mother said.

His father tended the family grape farm, exported wine from the vineyard and ran four supermarkets.

That comfortably middle-class life in Chile changed when a recording of Molina playing the piano made its way to a TV station, and he was invited on “Venga Conmigo,” a Sunday evening show.

On Jan. 15, 1993, Patito appeared on national TV, dressed in a thick, pure-white coat, his hair neatly combed. The video of his short performance shows his small fingers methodically tapping away. He was a month shy of his 4th birthday.

The cameo attracted notice: Two weeks later, Molina met with the minister of education, who suggested he could be the next Claudio Arrau, the renowned Chilean pianist, according to a newspaper account.

Then a scholarship program offered to help pay for Molina’s studies at the University of Chile in Santiago. Three times a week, Khouzam drove 4-year-old Molina an hour and a half to the Chilean capital so he could take classes with college students. “I used to live in that car,” Khouzam said.

After three years of traveling back and forth, the Molinas moved to Santiago to an apartment two blocks from the college. Molina’s dad would travel to the farm in Los Andes. Khouzam, a Syrian immigrant, found a job in the capital teaching Arabic. They thought Molina, then 7, had talent and wanted to discover “whether real or not,” Khouzam said.

Their son’s talent and recognition grew: When he was 5, Patito was invited to the Chilean city of Concepción to play “O Sole Mio” before Pavarotti, who was touring Chile with a symphony orchestra. Pavarotti sang along and was “simply fascinated” by Molina, a Chilean newspaper said. At 8, he played with jazz legend Herbie Hancock for the Chilean president at the time, Eduardo Frei Ruiz-Tagle. When he was 11, he accepted invitations from the Jordanian royal family to participate in an annual music festival and the Syrian education minister to play before audiences in Damascus and Homs.

But his family believed he could reach a higher musical level in the U.S., so they made another bet on Molina’s career and moved to Paterson, where relatives lived.

“Don’t be scared about the change,” Khouzam said, looking back. “After the change, you will find the best for your kids, the opportunities.”

Their new life was hard. They spoke no English and money was so tight they sought help from their pastor at St. Ann Melkite Catholic Church, who would give them ShopRite gift cards. Before Molina’s father came two years later, he would send money from Chile, but the hundreds of dollars — worth much more there — went only so far. Khouzam taught, and Molina would play after school and on weekends at the Brownstone to help out.

A full scholarship made it possible for Molina to attend the Manhattan School of Music’s pre-college program. Every Saturday, the 13-year-old with overgrown hair and halting English rode a bus alone from Paterson to Manhattan to spend a full day absorbing music theory and ear training and chamber music. On weekdays, he also took classes at the Newark School of the Arts after classes at School 9, Rosa Parks High School and, once his family moved to Woodland Park, Passaic Valley Regional High School.

Molina continued at the Manhattan School through college and graduate school, earning a master’s degree in 2014.

Near graduation, in the spring of 2014, he caught Aldridge’s attention while performing at a gala concert at the New Jersey Performing Arts Center. The encounter led to his pursuit of two simultaneous doctorates, something never before done at the Rutgers music school, Aldridge said. Molina expects to complete his Ph.D. in music composition in 2018 and a doctor of musical arts degree in performance in 2017.

Pianists usually specialize in performance or composition. To do both at Molina’s high level is rare, Aldridge said. But for Molina, they are intricately linked: Being a performer, “I can write for the piano in a very stylized, in a very pianistic way,” he said.

An earlier performance at the New Jersey Performing Arts Center, when he was a teenager, brought Molina good fortune. Mark Grier, vice chairman of Prudential Financial who then served on the board of the Newark School of the Arts, was in the audience and recalled feeling that “there’s music in Patricio that comes out through the piano.” He offered to help Molina in his career, a commitment that has extended to paying for Molina’s graduate studies.

Molina directs the choir at Immaculate Conception Church in Mahwah and teaches at Passaic County Community College. One recent Thursday, Molina guided students not much younger than himself through a compositional technique known as a fugue. While a Mozart sonata played over speakers, he traced the form of the music on a whiteboard. “You’d be surprised how many of the most beautiful melodies follow that progression,” he said.

Then he performed his own sonata, leaving one student, Ali Perez of Clifton, in awe. “I never heard a performer like that,” the 18-year-old music major said.

Molina loses all sense of time when he’s composing in his Woodland Park home, surrounded by a piano keyboard, TV and laptop, all interconnected. Sometimes, he sets alarms so he won’t miss appointments.

Inspiration strikes randomly, like when he’s hiking or riding the bus. Then he’ll record the melody by singing it into his phone.

Molina began composing his opera as a high school student during the long bus rides to Manhattan. Inspired by a 19th-century Chilean wartime romance, the opera “is based on all Chilean dance, Chilean rhythms,” Molina said. The libretto, or text, is in Spanish, which Molina hopes will help draw a Hispanic audience to concert halls.

Aldridge, who won the 2012 Grammy Award for Best Classical Contemporary Composition for his opera based on Sinclair Lewis’ book “Elmer Gantry,” gave Molina’s work high marks. “Nobody starts off writing a masterpiece of an opera,” he said. “For a first opera, it’s excellent.”

He added, “He’ll probably write many in his life, and each one will be better.”