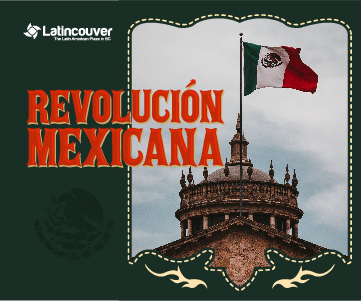 Revolution comes from the Latin “revolver” o “rollback” and in practice, it’ a fundamental and sudden change in political power which occurs when the population revolts against the government due to perceived oppression or political incompetence.

Mexico had its independence from Spain in 1810 and its revolution 100 years later, on November 20th, 1910 when Francisco I. Madero called to arms to unseat the dictator Porfirio Díaz who had been in power for 35 years.

For most of Mexico’s developing history, a small minority of the people were in control of most of the country’s power and wealth, this inequality brought poverty to the majority of the population and the gap between the poor and rich grew under Díaz.

Francisco I. Madero, who was educated in Europe and the US, led the opposition, and Díaz were pressured into an election in 1910, in which Madero was able to gather a significant number of votes. Díaz decided to put Madero in jail but he escaped. On the run, Madero issued the Plan of San Luis Potosí declaring the results of the 1910 election fraudulent and called for Mexicans to rise up against Díaz on November 20, 1910.

The Mexican Revolution drove around 1 million Mexicans to migrate to America but as a result of the revolution the constitution was created in 1917 and it established limits on the period of time politicians could be in power. It also included labor reform laws that covered 8-hour workdays, abolished child labor, and established equal pay all of this provided for a better future for Mexico.

Celebrations in Mexico were held at the Republic Square until 2006 when they moved to the Zocalo in Mexico City but were then canceled due to high rates of crime in 2014.