A little taste of Uruguay…

As a typical Latin country, Uruguay is expected to push the boat out for its Independence Day on August 25th, and rightly so, since this celebration comes only once a year.

That’s why we decided to go fully Uruguayan today with a recipe for making an A+ Chivito. The easy-to-prepare but delicious national sandwich:

How to Make It

If after preparing your yummy Chivito Sandwich, you start feeling like waving the Uruguayan flag and really into the Charrua vibe, then let me summarize years of their History for you. Don’t worry this is not your typical History class, it’ll only take two minutes, so pull out your 2-minute sand timer and let’s get started.

It was on 1816 that the Artigas was finally defeated. In 1821, Banda Oriental was made as the separate province referred as Provincia Cisplatina. After almost four years thirty-three Juan Antonio Lavalleja-led exiles at Buenos Aires returned to Uruguay. Again with the help of the troops of Argentine planned a revolution. This revolution was very inspiring for everyone especially for the Banda Oriental which ultimately made Uruguay independent. It was no more under the control of Portuguese Empire. After three year the Uruguay independence got recognized by Argentine & Brazil in Montevideo Treaty. Thus 25th August was declared as an independence day for Uruguay.

We all know, how amazing  Uruguay is, from sports to culture; considered the least corrupt country in Latin America, it is ranked first in the region for democracy, peace, lack of corruption, quality of living, e-Government, freedom of the press, size of the middle class, prosperity and security.

All of this with a population of just three million people.

Thanks for all Uruguay! Congrats on your day! 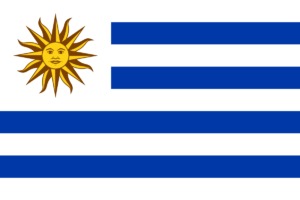